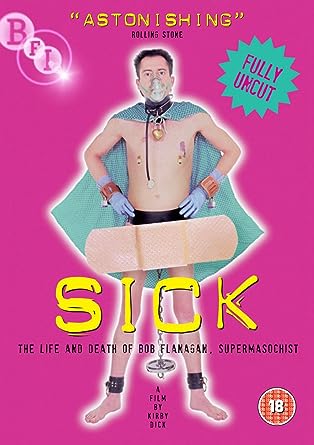 Sick: The Life and Death of Bob Flanagan, Supermasochist is a 1997 documentary film directed by Kirby Dick about Bob Flanagan, a Los Angeles writer, poet, performance artist, comic, and BDSM celebrity, who suffered from and later died of cystic fibrosis.The film premiered at the 1997 Sundance Film Festival, where it was awarded a Special Jury Prize.Directed by: Kirby Dick. Death. On January 4, 1996, Flanagan died from complications of cystic fibrosis at 43. He was survived by his wife and close artistic collaborator Sheree Rose. The final years of Flanagan's life, including his death, are the subject of the Kirby Dick documentary SICK: The Life & Death of Bob Flanagan, Supermasochist. Flanagan's participation in Born: December 26, 1952, New York City.